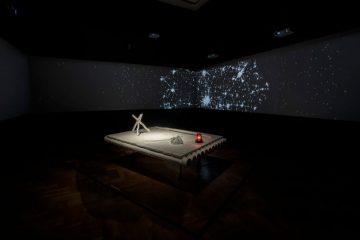 The Saint Louis Art Museum presents an exhibition of new work by Shimon Attie in Lost in Space (After Huck), the 113th installment of the museum’s popular Currents series.

For the exhibition, Attie is creating an immersive multi-media environment comprised of a large-scale sculpture surrounded by a six-channel video projection and audio soundtrack.

Lost in Space (After Huck) consists of a white cast epoxy resin sculpture of a raft populated by several objects indicating human presence: a knife, a corn-cob pipe, an oar, some sticks tied at the top, and a bindle bag. The raft and its rustic objects evoke a bygone era, in particular, that of Mark Twain’s 1884 novel The Adventures of Huckleberry Finn. But another item sticks out in this surreal scene—a police light sitting atop the raft, softly glowing red and drawing viewers into an awareness of the contemporary moment.

An immersive video installation surrounds the raft. The footage—featuring clusters of lights periodically disrupted by a flash of lightning—was actually taken from NASA satellites at night, capturing patterns of light that are emitted from American urban areas. The satellite images were then animated to create the video.

From the exhibition’s curator, Hannah Klemm:

“Attie’s installation establishes a purposeful ambiguity, creating a symbolic space where meanings from the past can be examined alongside important socio-political issues of the present,” said Hannah Klemm, assistant curator of modern and contemporary art. “With this wondrous environment, Attie overlaps multiple imaginaries and realities: contemporary lived space with romanticized depictions of nature, urban spaces with rural ones, and the celestial sphere with the terrestrial, man-made world.”