The Crossing is an art film made with Syrian refugees who had recently arrived in Europe, many on rafts over the Mediterranean, some just weeks before the filming.

The film unfolds as a series of slow-moving tableaux in which a group of elegantly dressed young men and women are inside a casino engrossed in a game of roulette.  The metaphorical tale that unfolds in The Crossing is based on the participants’ individual experiences of exile and flight. None of the refugees had any performance or acting experience.

While they appear physically present during the rounds of roulette, they are mentally absent—their deadpan expressions, slow movements, and silence evoke the brutality of their fate. No words are spoken throughout the film, and the soundtrack varies, sometimes conveying stormy seas or the pounding of an anxious heartbeat, at others, the ricochet of the roulette ball or gripping fingernails onto the table mat. Each participant holds a static pose, with the only movements coming from the camera, the spinning roulette wheel, and the participants themselves as, one by one, they slowly and robotically “place their bets.” With each passing tableau, one person disappears from the game without a trace or explanation. By the film’s end, only one participant remains, perhaps a living monument to the thousands who have been left behind, dead or alive.

The Crossing uses the language of contemporary art to reflect on the extraordinary risks migrants are forced to take in times of crisis, literally gambling for their lives.

Depending on the venue, The Crossing is sometimes presented as an immersive Installation, in which the roulette table top extends beyond the edges of the film and into the exhibition space. 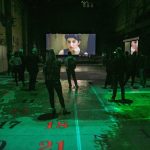 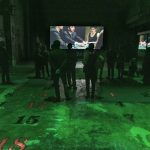 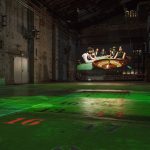