Kunstkraftwerk Leipzig is delighted to announce Stateless, the first German solo exhibition by NY-based artist Shimon Attie since he produced the celebrated project The Writing on the Wall in Berlin in the nineties. Stateless explores issues of flight, loss and belonging at a time when many immigrants are seeking refuge in Europe and are at risk of being banned from other parts of the Western world. Stateless also involves other communities, who lived, or are still living, in a situation of limbo, whether their predicament was caused by an ongoing conflict or the revocation of their citizenship and identity.

Stateless is named after an installation in the exhibition, which tackles the experience of Syrian refugees who have fled their war-torn country and undertaken a life-threatening journey to Europe.  More broadly, this artwork addresses the reality that human existence is subjected to the uncontrollable forces of life and death. In addition to the video installation, the exhibition also includes photographs from Attie’s earlier projects. Facts on the Ground (2013-14) delves into the physical, political and psychological landscapes of Israel and Palestine, where the two-state solution is still to be brokered. The Writing on The Wall (1991-92) evokes the daily life of the less affluent part of Berlin’s Jewish community, those originating from Russia and Poland in the Scheunenviertel neighbourhood in East Berlin. The Nazis revoked their nationality in 1938, one of the alienating measures suffered by these communities, before they became persecuted, deported and eventually murdered in mass.

The video installation Stateless has been specially configured for the raw spaces of Kunstkraftwerk Leipzig, a reconverted power station. It consists of a panoramic screen suspended in the former boiler room. The filmed sequences unfold as a series of slow-moving tableaux in which a group of young Syrian refugees act a metaphorical tale based on their individual experience of exile and flight. Engrossed in a game of roulette, the protagonists appear physically present but mentally absent: their deadpan expressions, slow movements and silence contrast with the brutality of their fate. No word is spoken and the ominous soundtrack oscillates between impressions of stormy seas and the pounding of an anxious heart, between the ricocheting of the roulette ball and the gripping of nails onto the tablemat. As in Agatha Christie’s novel, And then there were none…, all but one disappear. The last one standing seemed doomed to become a living monument to the thousands who have been left behind, dead or alive.

Stateless is produced by Kunstkraftwerk Leipzig

Shimon Attie’s Artwork is Featured on the PBS Newshour

Shimon Attie’s Artwork is Featured on PBS Newshour, broadcast nationally on Dec 22, 2021, as part of PBS’s Canvas (Arts and Culture) Series. The broadcast may be viewed here. 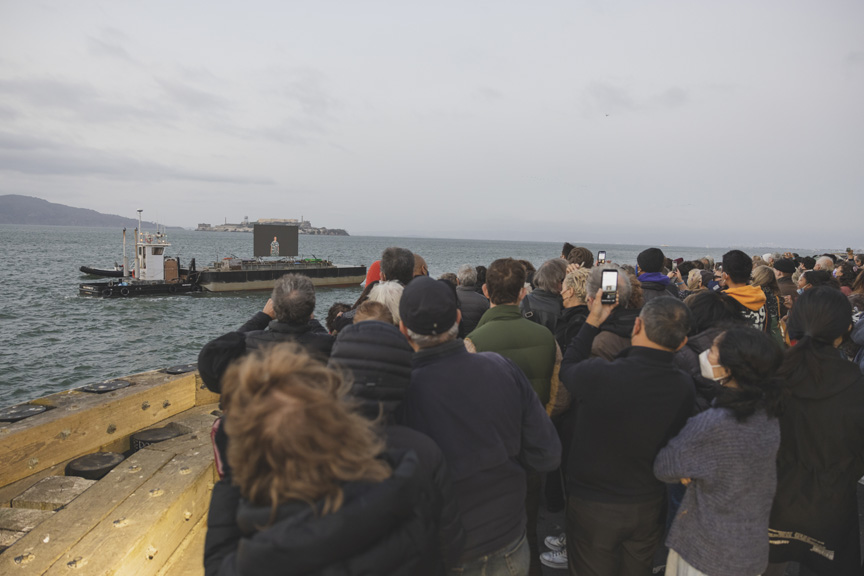 Night Watch in San Francisco Bay garnered rave reviews and press coverage, including among others:

The details of Night Watch’s Bay Area premier and related events may be viewed here.

The details of the solo exhibition, Here, not Here, at San Francisco’s Catharine Clark Gallery may be viewed here.