The Neighbor Next Door

Since its founding in the late 16th century, the Jewish community of Amsterdam experienced much less organized anti-semitism and repression than in many other communities in Europe. Nonetheless, during the years of Nazi occupation, more than 80% of the city’s Jewish citizens were deported to death camps and never returned. Due to a few well publicized instances in which Jews were hidden by their fellow Dutch citizens - the most widely known among these being the case of Anne Frank - a mythology of the “sheltering” Dutch has developed. Often overlooked is the fact that many Dutch collaborated with the Nazis and turned in their Jewish neighbors to the Gestapo.

Today in Amsterdam, thousands of illegal immigrants, without proper residence papers, are also in hiding, fearing deportation should they be discovered.  The Netherlands, like much of the rest of Europe, is struggling with the issue of how wide it should open its doors to needy immigrants, given the already perceived strain on the country’s social system.

The Neighbor Next Door took place at a number of addresses on the Prinsengracht where Jews and others were hidden during the war. For The Neighbor Next Door,  16mm film projectors were placed inside a window at  former hiding places.  Portions of original archival film footage were projected onto the street below. The footage used for the project had been secretly shot from above during the years of Nazi occupation by individuals in hiding with hidden cameras.*  Much of the footage shot from hidden cameras tends to shed an unflattering light on Dutch behavior during the occupation, as many of the filmed scenes reveal Dutch collaboration with their German occupiers.  Thus, images of the outside world as they appeared from the vantage point of those formerly in hiding were simulated and projected out into a public space.

*the sole exception was the footage projected from Prinsengracht 514, which was originally shot as part of a German propaganda film 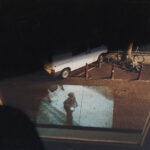 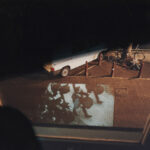 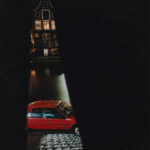 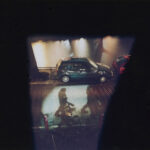