The Walk of Fame

Today in Krakow, as elsewhere, our awareness and understanding of the history of the second world war is steadily being displaced and determined by contemporary cinema. The result has been a confusion and inversion between actual history and history-as-created-for-the-movies.  On the Szeroka Street for example, through the use of film sets, a mock-up version of the  Krakow Ghetto erected by the Nazis was created for the filming of Steven Spielberg’s Schindler’s List, although the actual location was in the Podgorze district of Krakow.

As we lose a direct and unmediated relationship with this history, with a motion picture camera and screen now intervening, authentic historical sites, events and individuals are now in open competition with their celluloid copies in determining our understanding of history.  As actual history becomes conflated with cinematic fiction, it becomes more and more difficult to distinguish between the two. Local residents and tourists to Krakow must now choose between guided tours to authentic historical sites and guided tours “Retracing the Filming of Schindler’s List.”

Inspired by Hollywood Boulevard’s Walk of Fame  in Los Angeles, the square in front of the Old Synagogue on Szeroka Street was lined with twenty-four simulated 5-pointed terrazzo stars. The stars used in Krakow were based on the originals in Los Angeles, of nearly identical size, but were aesthetically altered to suit the site, which was in front of the Jewish Museum and former Old Synagogue. Instead of the names of movie stars, the names of actual persons who were on the real Schindler’s List were substituted. Their first names were abbreviated to protect their true identities.

The Walk of Fame project was not directed towards the individuals who lived through these horrible events, nor towards the specifics of any one film or cinematic event.  Rather, its intention was to highlight and critically reflect on the larger problematic eclipsing of historical fact by cinematic fiction - a phenomenon through which what we see at the movies becomes confused and taken for the real. 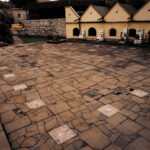 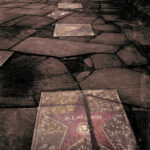 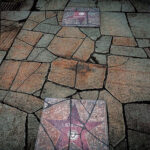 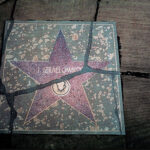 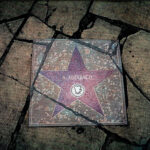 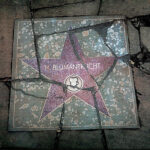 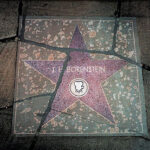 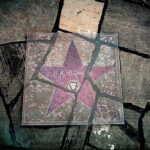